Homi Baba is one of the foremost thinkers of Post Colonial Criticism and belongs to the school of thought known as Post Structuralism.

Here in this article I would like to articulate some ideas of Homi Baba on Post Colonial Criticism. They are hybridization, mimicry, uncanny, doubling, difference, ambivalence and anxiety. For Baba, a nation is always in the process of evolution and a nation is not a fixed entity.

Hybridization is a process through which cultures interact, mix and develop new cultural and evolutionary tendencies. A common example can be taken is that of the English language. For example Black English has evolved by fusing many dialects of the native black with the colonizer’s English. Indian English has absorbed native English words and has also adopted words borrowed from Indian Language. British English consists of many Gaelic and Latin and French words and therefore if we look at English, it is always going through a process of change or hybridization. Hybrid English is a transnational language and is always adopting new vocabularies into its lexicon. Another common example would be that of Dance and Music. Dance and Music have fused various elements of the Orient and the Occident.

Mimicry refers to the process through which the colonized mimic the language and culture of the Colonialist. Mimicry is a powerful tool, a coping mechanism of the colonized to resist the rule of the colonizer. The white other becomes the subject of my gaze and I adumbrate his or her cultural moorings into my possessive outlook. For the white, the discourse of the Orient has been a fragmented one, a one of bitter misunderstanding. According to Edward Said, the discourse of the orient has been a philosophical and intellectual construct drawn out from occidental narcissism and fantasy. 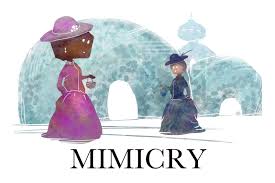 A lexical meaning of the word uncanny would be something strange, mysterious in an unsettling way. For the white, oriental culture and religion has been marked by the strange or the uncanny. Baba also discusses the problem of migrant cultures. Migrant cultures to the Occident bring into it uncanny elements. Uncanny also represents a misunderstanding of the mass psyche of the colonized. For example let’s take the Blues. Blues a form of Black Music emerged as an uncanny one, a one to show solidarity and protest against the whites. Mahatma Gandhi’s behaviour as a political protester of the English rule was an uncanny one. The British simply could not understand and tolerate the half naked fakir. The occult aspects of the Australian aborigines were ostracised and many were made converts into Christianity.

Doubling as used by Homi Baba refers to the process in which duplicates of the Colonized were created. The colonized were trained in the language and culture of the Colonizer, mainly to suit them for administrative purposes. For example India as a British colony needed a large army of clerks to run their administrative regime. Doubling became a headache for the Colonizer as these doubles soon realized their self worth and started protesting against colonial rule.

Difference is a term taken from Derrida’s Deconstruction. The term incorporates the understanding of semantic binary divide by differing and deferring. Colonialism has marginalized the brown and the black by privileging of the white. This marginalization has been violent and autocratic. There is a conflict between the racially superior self and the racially inferior other. The White self’s Christianity is a racially superior religion than the religion of the Red Indians, Africans and Aborigines. Language has bifurcated texts into binary divides of the self and racial other. For me Colonialism is still an ongoing process. For example let’s look at Native Speakers of English being imported into South East Asian Countries to teach English. A native speaker of English is privileged over whites and browns who are adept in English.

Anxiety as a term used in postcolonial criticism referring to the tension of the colonizer when he is dealing with the colonized. We can use the example of Non Violent struggle against British rule espoused by Mahatma Gandhi. The British simply could not understand what the principle Ahimsa (non-violence) was and used ruthless force to subjugate the peace movement. Their ambivalence and complete lack of understanding of the native people, only strengthened the struggle for independence. Colonial domination was not straight forward but was clearly marked by anxiety and ambivalence.

Anand is a blogger from India who’s blog explores, philosophy, fiction and poetry. You can visit his excellent blog here:

4 thoughts on “Homi Baba: Why We are Still Afflicted by Colonialism Everyday”